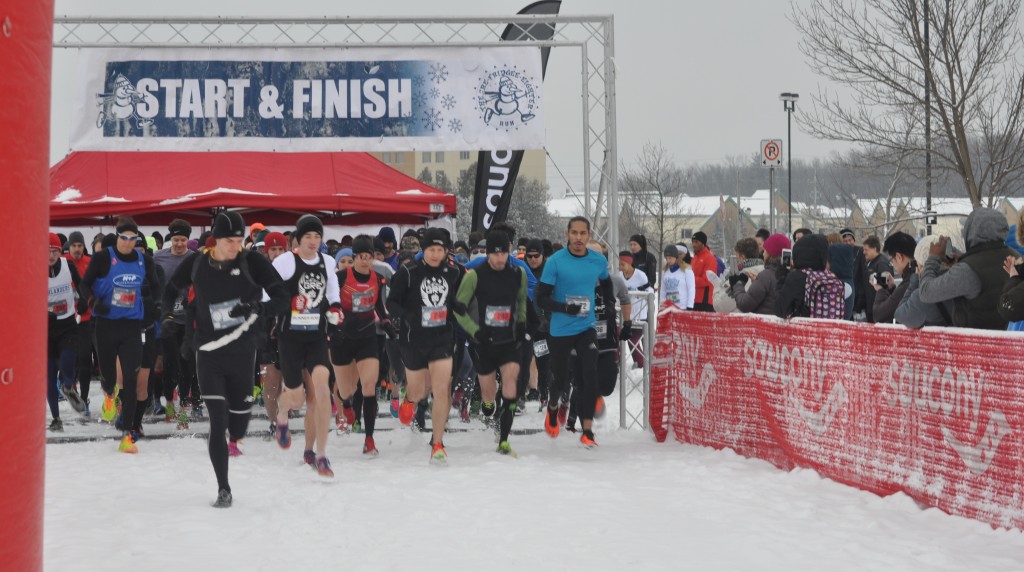 The first Run Waterloo event of 2017 is in the books. Thanks to everyone for braving the snowy, slippery conditions to race with us today at the Re-Fridgee-Eighter!

The 8 KM was won by Trevor Hofbauer, a new member of Guelph’s Speed River track club, and Gillian Willard, who coaches the local Health and Performance club. Trevor’s time of 24:52 was especially impressive in today’s weather.

Robert Brouillette (Grand River Endurance) and Krista DuChene (Speed River) won the 8 MI. For Rob, he is the first runner in Run Waterloo history to reach 20 event wins! An Olympic marathoner (Rio 2016), this was Krista’s first race as a masters athlete (she turned 40 in January), and, no surprise, she set a new masters course record!

We have over 1,200 free, high quality photos on our Flickr page for you to download and use. Enjoy!

The Re-Fridgee-Eighter raises money for Juvenile Diabetes Research Foundation. Thank you to all donors and fundraisers!

Congrats also to Erik Vicujnik and Kristin Howard, who ran this race for free by winning entries from Michael Hewitson – My Next KW Race! Be sure to participate in the next contest, sharing what you love about Waterloo Region, by February 14th for a chance to win a free entry to our next race, the Laurier Loop!

As most people in the Run Waterloo community know, Lloyd Schmidt is currently battling cancer, and could not join us at RIM Park today as he is currently in the hospital recovering from surgery. This was the first race since becoming Race Director in 1987 that Lloyd has missed – a streak of over 300 events – and his absence was felt by many. Some volunteers thought it was unfair he couldn’t be at the race, and so they decided to take the race to him.

At 2pm a dedicated group of runners and volunteers made their way to Grand River Hospital – mostly by running – and gathered outside of his hospital room window. Over the phone, Lloyd counted down to the start of the Re-Fridgee-Eighter round 2, and the group “raced” around the parking structure in his honour. The Schmidt family is deeply touched by the support they have received from the community and want to thank everyone who was there or sent messages.

Thank you @RunWaterloo for a great #Re-Fridgee8er . The snow made it a real Canadian Run. pic.twitter.com/9WKRi4iu4n

Great morning with my 8 mile team at #ReFridgee8er The Schmidt family work so hard to make these races great. Big thanks guys! #RunnerBliss pic.twitter.com/IG8NnV37NV

Great day at the @RunWaterloo #ReFridgee8er! You win this round @TrevorHofbauer (and all subsequent I’m sure). Congrats to all who raced!

Me and my #kickassrunner buddy @michelle_42.2 were 3rd (her) and 4th (me) women in today’s 8 miler at the #refridgee8er and both took 1st in our age categories ❄️🏃🏼‍♀️ ! Conditions were insane with snow and slush and ice pellets coating eyelashes making visibility and traction an issue, but we powered through 💪🏼🤘🏼. I wanted to finish top 5 and once I got a feel for the conditions made sub 4:30/km my goal pace and managed to hit both of those so I am beyond thrilled ☺️❤️. Always a pleasure to be racing with friends and an honour to be on the same course as @kristaduchene 😮🇨🇦. Was too shy to say hi though… maybe next time! What an awesome #sundayrunday , blizzard and all 🌨👌🏼 #runwaterloo #raceday #8mile #justlikeeminem #badjoke #distancerunner #distancetraining #marathontraining2017 #runningbuddies #runfast #runfar #lovetorun #livetorun #winterrunning #snowstormrunning #blizzard #mylashesfroze

Hey @runwaterloo! Hope one of your runners is ready for a frosty treat! ☃️ . One lucky runner will win this draw prize from Wilderly Bakery, two dozen royal icing snowman sugar cookies. Must be registered in the 2017 Re-Fridgee-Eighter and present at time of drawing to win this prize. . Thanks for having me guys! See you at the race! ❄️☃️👟 . . . #runwaterloo #refridgee8er #kitchenerwaterloo #kwawesome #snowman #cookies #sugarcookies #royalicing #letitsnow #runnerscommunity #partnership #shoplocal #localevents #sponsor #snow #running #waterlooregion

First RunWaterloo race of the season and its a snowy one! Adjusting pace for conditions and running in support of #TeamLloyd. Facing a bit of ice and snow is nothing in comparison to a battle with cancer and our community is standing behind this incredible man and race director.

Missed you at the race today @LloydTSchmidt , but happy that we were able to bring the Re-fridgee-eighter to you. #teamLloyd pic.twitter.com/NovMfWzjwI