Minding the gap: men vs. women in running

At the 2015 ENDURrun, we had a number of different spirited challenges within our Health and Performance team. One was a very entertaining and fun challenge between a loving/ ruthlessly competitive couple- Howie and Manny. Howie ended up taking the 160K, week-long challenge by 19 minutes, or just under 2%, after around 16 hours of racing. We also had an all-women’s team who were up against all the boys as they were the only 100% female crew. They posted a 4th place time of 13 hours, 23 minutes. This put them about 2 hours 8 minutes back of the first place team (they would have to be about 16% faster to catch them), and 17 minutes off the podium (they would have to be just over 2% faster to sit in 3rd).

Men and women competing in running is nothing new. We are all clumped together at the start line, and if you race enough (and are not an elite male), eventually you will develop rivals of all shape 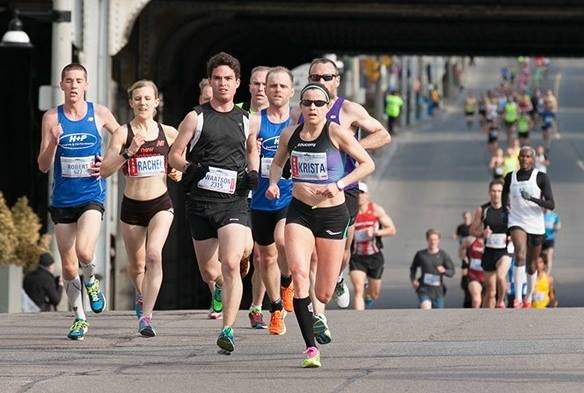 s, sizes and genders! Check out the picture to the right of the 2014 TYS10K. As you can see, I am trying my hardest to run with elite Canadian female athletes Rachel Hannah and Krista Duchene. I ran 33:17 that day, and they both handily destroyed me. I can’t wait for my revenge…

One thing that is very important to keep in mind when men and women compete is that men, without a doubt, have a genetic advantage over women when it comes to running. Of course there can be an individual woman who is more gifted than an individual man. Taking the genders on average though, men develop more muscle, carry less fat, and generally have a higher VO2 max. Taking out my old genetics textbook, I am reminded that all of these changes and physical differences are the result of ONE gene (SRY gene) on the Y-chromosome.   We all start our lives as women in the womb, but because of the presence of the SRY gene, men are pumped with 7-8% more testosterone on average compared to women. Women would REALLY have to dope to see this type of physical change.

So how significant is this performance gap in running? Before we get to this, it is important to keep in mind that we are talking about averages. As I said, there are still without a doubt individual women who are genetically gifted to run above and beyond certain men.

Consider this: VO2 max is 40-70% inherited, depending on what study you look at. The remaining 60-30% is what you can change. Joan Benoit, a 1984 gold medalist in the marathon, has one of the highest recorded female V02 max readings ever (78 ml/kg-min). The average untrained male will have a reading of about 35-40 ml/kg-min. Let’s assume that VO2 max is 55% inherited (somewhere in between that 40-70% range), and let’s assume the average male starts with a V02 max of 40 ml/kg-min. This means that the average man will have the potential to improve their average VO2 max from 40 by 45% all the way to 58 ml/kg-min. That is a mere 3/4 of the ability to consume oxygen compared to Benoit’s 78!

Of course, V02 max is not the sole predictor of running performance. These average men who hiked their V02 max up to 58 ml/kg-min would also possess some adaptations to enhance their running economy such as a pelvis that is more narrow, and muscles that provide a better spring. It’s pretty safe to say that these changes would not account for a 25% improvement though over an athlete who has an exceptional running economy herself. So yes, some women are genetically more gifted than some men.

Now, back to what happens on average. What we have seen is something pretty amazingly consistent through all distances. Regardless of what distance you are looking at, it seems that men will perform, on average, 11-12% better.

Take for instance this study that looked at the performance gap at a number of different distances among the best runners in the world. The only endurance distance with a less than 10% gap was the marathon at 9.3%.  There were only 5 distances looked at which saw a greater than 13% gap, including 14.3% at the 5K. This is a limited sample size, but it gives you the right idea. The more research and data that is looked at, and the more factors that are controlled for, the closer the gap seems to get to 11-12%.

Are women catching up in the long run?

There was valid argument going on for a while that women showed a more narrow gap in performance in ultra distances (above marathon distance). Some studies have suggested that; the longer the events are, and the more opportunity women have to participate and train, the more likely they will be to eventually surpass men.

Take for instance this study looking at 90K performance among men and women of similar marathon ability (3:36 for the females, and 3:39 for the males). They also controlled for other factors such as training. Interestingly, the women were able to out-compete these marathon-matched men by 10% in the 90K! Questions have been brought up about women’s ability to metabolize fat among other reasons why the gap might be smaller among women and men at these ultra distances.

However, what we now know is that there was a huge flaw in this way of looking at the gap. A man and a woman, who are trained to be equal in the marathon, are not necessarily trained to be equal at other distances. I am curious what would happen if they took this group of men and women, and had them race a 100m dash! I have a feeling with the higher muscle mass and likely power output, the men, despite being slightly slower at the marathon, and much slower at the 90K, would still be faster at 100m.

So how do you explain the results of this study while still maintaining the 11-12% rule? Researchers realized the women who had effectively tied these men in the marathon had one thing going for them that helped them as the distances went up: they were smaller.

Being smaller gives us a higher surface area to body mass ratio. Since we cool off on the surface as we sweat, the better that ratio is, and the more effectively we can stay cool. This heat homeostasis becomes increasingly important the longer and hotter the race is.

However, that does not mean smaller men don’t also exist. We also now know that in these ultra distances, when the best trained women and best trained men go head to head in the event they are suited for, and not matched in one event and then forced to do another, that 11-12% rule of thumb seems consistent. Even in the study mentioned above, with an incomplete sample, a gap of 14% was found in the 100K, and 19% at 200K in favour of men.

So what does this all mean to you? Well, if you take a man and a woman, and they have similar genetic ability relative to the average of their gender, they have a relative equal ability to respond to training, and all other factors such as nutrition and training are kept constant, we would expect an exact tie to take place when the man beats this perfectly matched female by 11-12%.

So, back to my examples at the beginning of the article. If and when I get my revenge on Rachel and Krista (I won’t), one thing I have to keep in mind is if I beat them by 1 or 2 seconds, does that still count as a win, or did I merely lose by 10.99%? Did Howie REALLY beat Manny by 2%, or did he actually lose by about 9%? Was our women’s team actually good enough to sit on the ENDURrun podium by 9% rather than being 2% behind 3rd?

These are questions that are tough to answer, because there are so many factors at play. The more I think about it, the more it is apparent that these are two distinct physiologies at work that really shouldn’t be compared directly. Maximizing performance out of both requires a different approach, and challenges faced by each gender is unique. If that 11-12% was so clear, why not just give every man an 11% handicap and then race us all in the same category? There is something to be said about a sprint finish, and racing head to head. That is why it makes sense that official results and awards go by gun time rather than chip time!

So yes, keep official competitions, results, and awards: separate for men and women. But, I think it’s also great to unofficially have fun battles with our friends while keeping this 11-12% in mind.

If you are a man who has beat a female rival by 20%, you are either closer to your prime competitive age, you trained harder, or you are more genetically gifted- you won! If you are a woman who beats a man by 1s, then I hope this article helps you to take EXTRA pride in that win! And as for the woman who loses to a man, but by less than 11-12%, well now you have some ammunition for a debate. Many would argue that you might have actually won that race after all!