Running beyond the limits of pain

For anybody to run at their best, regardless of ability, that means pushing through pain.  I am here to tell you that ALL of us runners, while we feel we push at or above our limits, are still likely not reaching our physiological limits of performance.

It would be nice to finish a race knowing that we got the most out of bodies as we possibly could, however, this just isn’t the way we are built.  When we run, distress signals build up in the body (lactic acid, heat etc.).  As these distress signals ramp up, our central nervous system slows us down.  Many researchers argue that this stimulus to slow down is so powerful that the brain makes it impossible to push our bodies to their physiological limit.

Take for instance this 2010 study.  The researchers showed that the use of the painkilling drug, acetaminophen, resulted in a 2% increase in cycling performance.  The acetaminophen did not impact the body’s physical ability to perform, it solely masked some of the pain, and as a result the athletes went faster.  In other words, it helped the athletes use more of their physical abilities.

On a side note- I definitely would not recommend taking Tylenol as a performance enhancing drug.  Firstly, it can mask injury pain, putting you at risk for more serious injuries.  Secondly, I really just do not like the idea of taking medication to enhance performance.  Plus, if the Tylenol works ONLY by removing the pain stimulus, perhaps we can all just learn to tolerate more pain instead!

While consciously managing the pain we experience can improve our performances, it is quite important to realize that it’s not as straightforward as just mentally overcoming this pain.  In reality, our minds often trick us into slowing down far before we even get the chance to feel discomfort.  The brain can trigger this entire process for one reason: anticipating that pain is coming.

For instance, studies have shown that when cyclists are placed in a hot environment, they will unconsciously slow down to prevent overheating.  In a fascinating 2012 study published in the European Journal of Applied Physiology, a group of cyclists were put through a 30 minute time trial test.  The riders completed the test in three separate conditions; a colder temperature, a warmer temperature, and a warmer temperature while being deceived into thinking it was colder.  To no surprise, the riders in the warmer conditions pushed a lower average wattage than the riders in the colder conditions. Yet, when the warm-environment athletes were tricked into thinking they were riding in colder air, the difference between the groups vanished.  These deceived riders pushed the same wattage as the athletes in the colder conditions.  Simply put, the brain decided to slow down the legs in pure anticipation of overheating, not in response to overheating.  When that anticipation was taken away through deception, the warm-environment riders pushed as if it they were riding in the cold.

Long story short: the riders didn’t slow down BECAUSE they were hot, they slowed down PREDICTING that they might get hot.  The best part is that this was all an unconscious phenomenon. 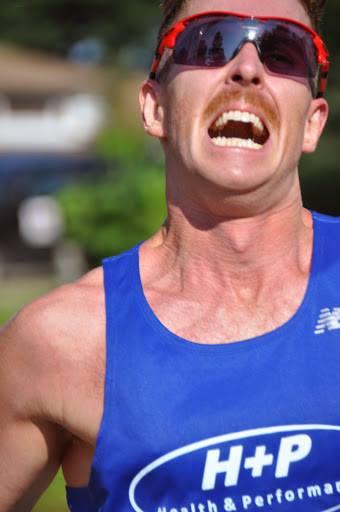 The practical application of this research is simple when first considered, but then quickly becomes very complicated.  The simple application: you probably are NEVER pushing your full physical ability.  Keep this concept in the back of your mind when you are racing, when your legs are burning, when your lungs are gasping for air, and when your brain is screaming at you to slow down- it’s all just a trick, and you probably don’t have to slow down (at least not as much as you feel like).  I tell myself this all the time when the going gets tough, and it seems to give me the confidence I need to push a little harder and keep the pace I want going.

The complicated application: learn to control the pain signals with specific strategies.  For instance, there is some research out there showing that keeping a cooler core body temperature prior to a race will delay the onset of the heat-induced stimulus to slow down.  Warm ups are important (they cause vasodilation and increased blood flow to the muscles you need for running, they increase glycogen mobilization and feed sugar into your blood), but an overall increase in your core temperature may NOT be one of these benefits.  Avoiding this by wearing a “frozen vest” is something a number of athletes are implementing, especially when competing in hot environments- just one of many ways athletes are strategically trying to get their brains to stop slowing them down.