Toning shoes – Do They Work?

To become a better, faster, fitter athlete, there are some sure-fire ways to succeed.  Generally speaking, if you run more, mix in more intensity, do some strength work and maintain consistency, you will improve very predictably.  The one downside to these guaranteed methods? They require time and effort.

I truly believe that most people are not against putting in time and effort…that is, until a day becomes absolutely filled with work, kids, traffic, house work, homework and shovelling the driveway AGAIN.  It quickly can become tough to put in the time and effort required to see the results we want, and sometimes we reach for shortcuts.

One great example of a widely used shortcut: toning shoes. 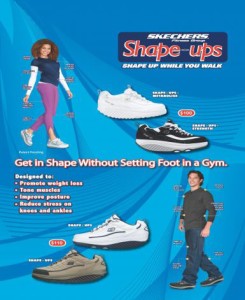 While there has been a drop in popularity of these shoes in recent years, it wasn’t long ago that we saw them littered throughout retail stores.  As you can see, the shoe looks relatively normal and simply has a fat, curved sole attached to the upper.  The idea? This massive sole will tone your calves and gluts, helping you burn more calories without you even noticing the difference.

For instance, Reebok claimed that by wearing these shoes, you are forcing your hamstrings and calves to work 11% harder, and your glute activation to rises to 28% when compared to using regular shoes.

Reebok wasn’t alone; Skechers also had their version of the toning shoe.  In their advertisements, they claimed a number of benefits including more muscle activation and weight loss.  Who needs a gym when you have shoes with thick soles?!

So were these companies telling us the truth?  Check out the FULL study published here.

In the study, subjects walked on a treadmill, and researchers used EMG to monitor muscle activation while subjects used a few different models of these toning shoes compared to a control (New Balance running shoe).  They also measured how much oxygen they were using and how many calories the subjects burned.
This is what they found:

NO DIFFERENCE BETWEEN THE SHOES 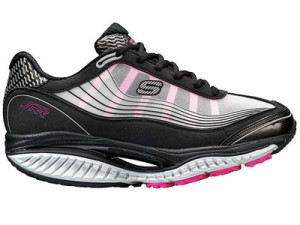 If you have the time, take a look through the data in the above article.  It is quite interesting to see that no matter what pace or grade the subjects were tested at on the treadmill, everything stayed pretty much the same between shoes.

An interesting side note: when the speed and incline went up (3mph to 3.5mph and 0% to 5.0%), the muscle activation, oxygen consumption and calorie consumption also went up (makes sense).  The reason why this is valuable knowledge is because with just a small increase in speed and incline (in my mind 3 vs. 3.5mph is barely noticeable), you will induce more changes than these thick shoes ever could!

So were companies like Reebok making false claims?  Where did they get those 11% and 27% muscle activation numbers?  Who knows.

When these studies refuting the efficacy of the toning came out, IF these companies had the evidence, they would have defended themselves.  Instead, this happened- Skechers and Reebok gave people their money back.

If you have these shoes, and you are using them to get in shape, it’s time to get rid of them!

If something seems fishy, before you add a new gimmick into your training, do some research.  It is important to not look exclusively to the people who are selling it for your information.  These toning shoes seemed a little too good to be true, but it was at least plausible that they could induce increased muscle activation.  The science proved otherwise, and it’s time to let go of this gimmick.

Did you have a pair of Shape-Ups? What are your thoughts?