Another beautiful day, another new course, and another great race. Thank you to everyone who ran, walked, volunteered or spectated at the 39th annual Waterloo 10 KM Classic, and happy Father’s Day to all the fathers and grandfathers who participated!

Everyone is affected by the ongoing construction in Waterloo Region, and this event is no different. Although we were unable to hold the 10 KM Classic at University Stadium for the second year in a row, we maintained the tradition of finishing on a track at St. David Catholic Secondary School this year. The course was flatter and faster than last year’s; however, heat and wind were obvious factors.

We also launched a new brand at this event. Take a look and let us know what you think! On a day where we debuted our new slogan, ‘inspiring community through running,’ we witnessed many inspired performances out there in the heat!

Results and Battle of Waterloo IV 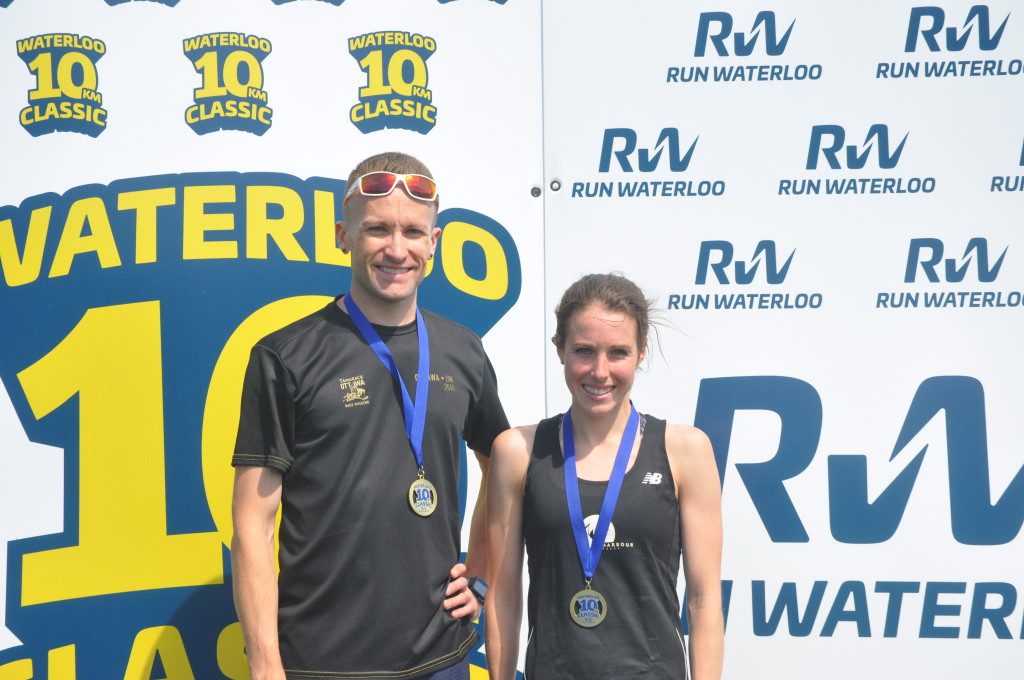 There was an immense display of talent on the roads of northern Waterloo this morning, from the 3 KM to the 10 KM.

In the namesake distance, the men’s race was won by John McLean in an event-best time of 34:57. McLean has raced the 10 KM Classic six times, with this being his first overall victory. Stephanie MacNeill, winner of the 2015 Oktoberfest Run 10 KM, claimed the women’s title in a time of 39:19.

The 10 KM also marked the first stage of the fourth Battle of Waterloo. Based on current registrants, McLean is leading the men’s battle, with a comfortable 3:59 lead over Ian McCreery. Michelle Gravill is leading the women’s battle, 7:52 ahead of Donna Simpson. The next stage is The Runway, a 2 mile race at the Region of Waterloo International Airport on August 20. Registration for BOW 4 is currently closed; however, all 10 KM finishers should stay tuned as we will be reopening registration for one final chance to enter.

Saucony Canada-sponsored athlete Erin McClure took the women’s 5 KM title in 17:18. This makes three consecutive wins for McClure at the Waterloo Classic 5KM! The men’s race was won by Robert Brouillette in a time of 16:02. Local club Fastisfun set a new Open Team record with an average time of 18:51 for its top five finishers.

The 3 KM is great for families, and is also timed with finisher medals. Congratulations to all finishers!

This year the Waterloo Classic supported Extend-A-Family Waterloo Region, a local organization that promotes inclusion and serves individuals with developmental and physical disabilities. In total over $5000 was raised, and pledges are still rolling in. We’d like to thank everyone who donated and fundraised to support this worthy cause!

Over one thousand photos are posted to our Flickr gallery. They are yours to download and use for free. Enjoy!