Does ingesting protein during a run enhance performance?

I have written many times(1, 2, 3, 4)  about the importance of ingesting carbohydrates during a race (if it’s long enough).

I’ve also discussed how taking in other sources of fuel, like protein, is not the best move due to it triggering an increased risk of GI distress. The reason: in part, protein is not absorbed and metabolized as quickly as carbohydrates. Delayed gastric emptying results in water diffusing into your guts and increasing the odds of needing to take a PB-killing washroom break! 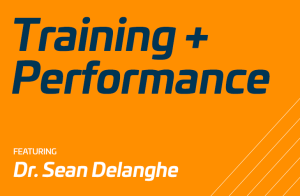 One thing I have heard in response to this tip from patients and athletes at H+P is that IF one is able to handle protein from a GI standpoint, is it worth experimenting with on top of carbohydrates as a fuel source? Is there an additional benefit to taking in protein during a race if it doesn’t bother your stomach? That is what we’ll be looking at with this article.

To answer this question, we will first look at this study, which was published in 2010. Here is the complete PhD thesis (so you can enjoy ALL the references and details) that the study I will refer to was completed for.

It was a double blinded (subjects and testers didn’t know who was consuming protein and who wasn’t) cross-over (all people tried with and without protein) study. Despite only 12 subjects being included, it was extremely well designed otherwise. 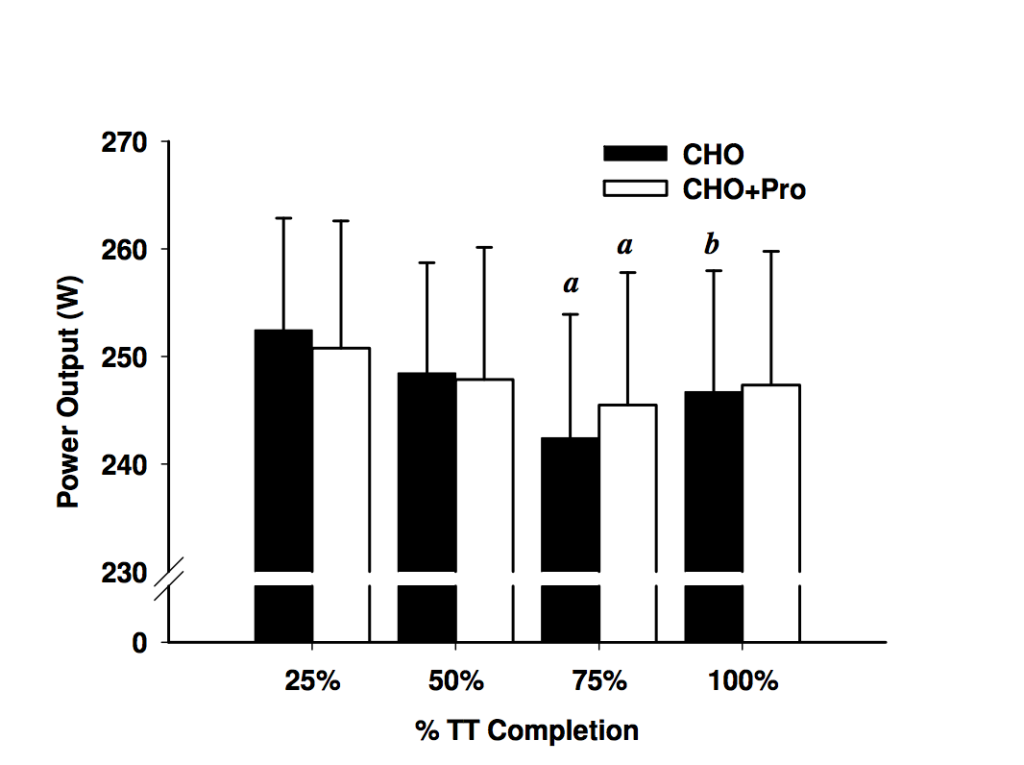 As you can see, no matter where you are in that TT, the power output is virtually identical between both groups. The protein offered no addition benefit in performance. 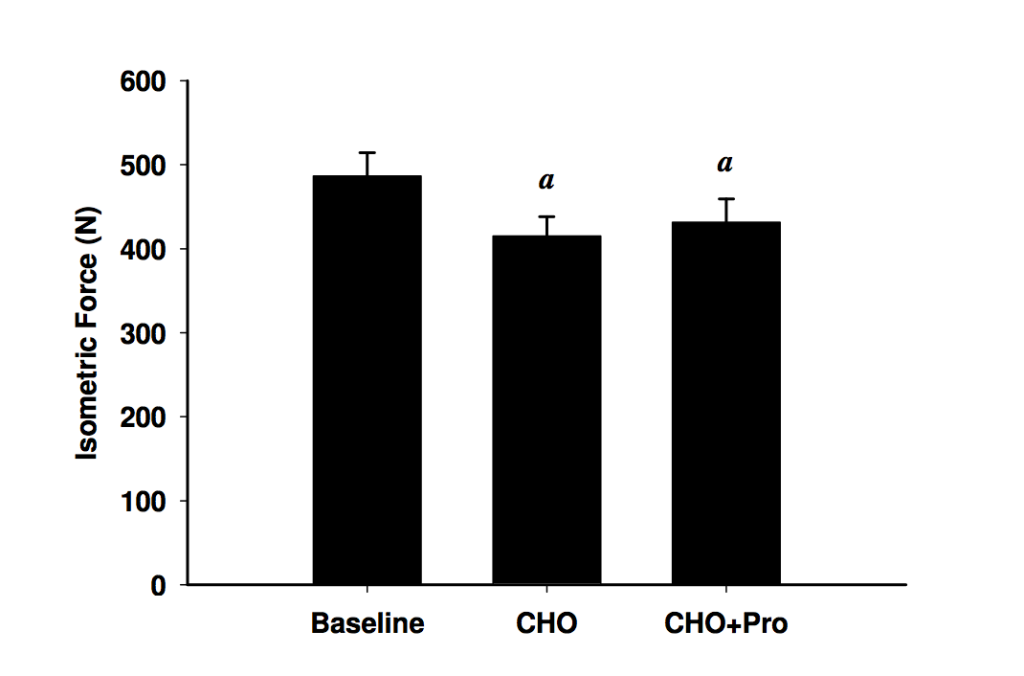 It doesn’t stop there. Take a look at the above graph. The bars show how much knee extension strength (quads) each athlete had pre- and post-TT.

As you can see, both groups showed an equal reduction in strength from baseline with the protein not helping at all to maintain strength. 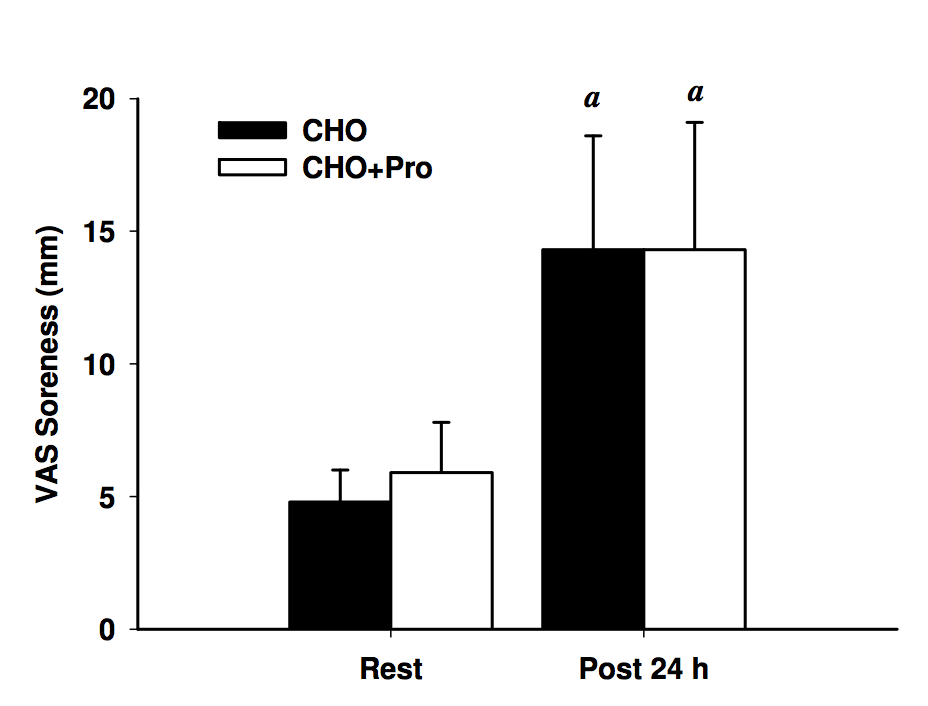 Finally, take a look at the above graph. The VAS is a measure of how much subjective muscle soreness the subjects were feeling.

As you can see, both groups, whether they ingested protein or not, felt equally sore post- TT.

So, this study shows that protein ingestion in combination with already optimal carb ingestion does NOT enhance your ability to race at your best, nor does it help to maintain strength or make you feel less pain!

The above study isn’t the only one that shows protein ingestion during activity does not enhance performance. Take for instance this study published in 2006.

Here, subjects did an 80K TT ride either with

These researchers showed that the time to completion was EQUAL for the carb and carb + protein athletes.

It was also nice to have the placebo group in this study as they confirmed that both groups were receiving the expected, status-quo, carb benefit as both carb and carb + protein athletes were 4.4% faster than the placebo group.

This study from 2008 once again proved the futility of ingesting protein during a race. In the study, athletes were once again TTing on a bike with either carbs, carbs + protein, or a placebo.

Does this mean the protein slowed the athletes down? I have some thoughts on this, but that debate does not matter for the purpose of the decision we are trying to make. Adding protein clearly does not enhance performance if ingested during your event.

When does protein during help?

It is clear that when you are competing at your best, ingesting protein with carbs does not enhance performance.

However, these studies are not to be confused with deceivingly similar studies that show protein may help. These seemingly contradictory (but not really) studies have two key features (which each article I have referenced here discuss in detail):

(1) They measure time to exhaustion rather than performance (i.e. how long can you hold a certain pace vs. how fast can you race a marathon). Since our goal is to race at our best, then the ones I showed above are more useful and directly applicable to what we are trying to do.

(2) They do not include adequate carb ingestion. The goal should always be adequate carb (60g/h) ingestion during your race if it is long enough. If you are unable to achieve this, then it makes sense that protein would help.

Finally, what about ultras? When I am talking about protein ingestion during, these are studies looking at events that take hours, not days. So from the marathon distance down, it is safe to conclude that protein does not boost performance. When it comes to ultras and multi-day races, that is a discussion that deserves an entirely different article.

When you’re racing, don’t consume protein because, whether it causes GI distress or not, it does not appear to help enhance performance.

Now, some may argue that taking in protein directly before or during an activity is important for recovery. Is there any validity to this? I will be discussing that in my next article!