Running vs. videogames: Which makes us smarter?

Whenever I get back from a run, I typically feel as though I can think with more clarity and work more efficiently. Not only that, I have sometimes gotten the impression that if I go for a run, my retention of newly learned information skyrockets. That’s why during my days as a nerdy chiro student, I would try my best to separate intense study sessions with run breaks. Is there any truth to what I experienced, or am I actually just finding creative reasons to procrastinate via running when I don’t feel like working?

That’s what I am looking at with today’s article: memory performance in those who go for a run vs. those who play Counter Strike.

In the study, 60 participants with an average age of 18 were put through the following sequence:

Without getting into the physiology of what causes our memory to work, I think it’s most valuable to know what works best. In the case of this study, running destroyed chilling outside and playing Counter Strike: 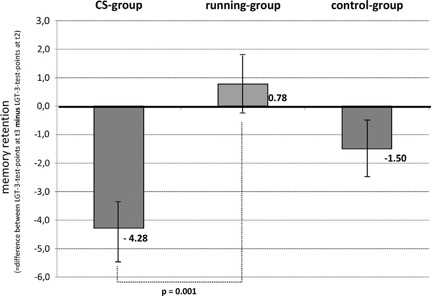 So as you can see, the running group (middle bar with the only positive value) had the best memory retention of the three groups by far. So if you’re trying to study, or get work done, and need a break, some physical activity is the way to go! Better than just hanging out and WAY better than playing a video game.

When I was reading this article, I was a little confused by if and how cortisol release alterations from the 3 activities influenced memory. The hypothesis of the authors predicted a release of cortisol in both the running and Counter Strike groups. In addition, they predicted that playing Counter Strike would provide an additional form of psychological stress that running would not induce. This would, in turn, have a detrimental impact on memory.

In reality, what happened was:

So, in contrast to what one may think about playing an exciting video game, it does not seem that under the circumstances of this study that it induces a stress response and cortisol spike.

So does that mean an increase in cortisol improves memory? This study is far from concluding that. As these researchers have shown, for instance, if there is an emotional/psychological stress, it will undoubtedly induce a spike in cortisol. However, even though cortisol goes up, this non-physical stress inducer also presents the brain with competing information. As a result, retention goes down. So even though this study showed that running was related to better memory and a spike in cortisol, our goal should not be to induce a massive cortisol spike so we can remember things. This is a classic case of distinguishing between causation and correlation, and the production of cortisol was correlated with the enhanced memory, and not conclusively the cause (not yet anyway).

This study gives us yet another reason why it is so important to exercise. Running is like a super drug! If there was a pill that you could take that would make you lose weight, lower cholesterol, lower blood pressure, manage and prevent type II diabetes, increase bone density, improve your body fat percentage, decrease symptoms of depression and anxiety, and to top it off, improve your ability to remember things, wouldn’t you take it everyday? Well, fortunately for us, running is cheaper than a pill (Garmins, gels, races, spandex shorts aside), and only takes 30minutes/day to get these benefits and more!

What this study also shows us is that video games have a detrimental impact on intermediate term memory. If you’re taking a break from studying, or working on an important report for work, ideally you should go for a run, but relaxing by going outside and talking to friends trumps a video game.  While the mechanism certainly isn’t clear from this study, playing Counter Strike severely handicapped the subjects when it came time to remember what they had learned.

So, to maximize memory, take breaks by running, and wait until the job is done to celebrate with video games.