Strap on a weighted vest to boost your running economy 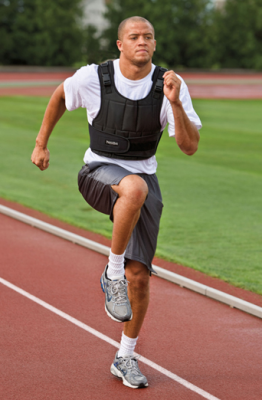 Are you striving to become a faster runner?  Maybe you should try strapping on a weighted vest when you warm up!

Some new research is showing that by warming up with a weighted vest (similar to how a baseball player will swing a bat with a weighted doughnut before they step up to the plate), runners are showing an acute increase in leg stiffness.  This stiffness leads to an improved running economy, which could potentially lead to running faster.  Skeptical?  Let’s take a look at the science of why this happens.

How to run faster

V02max is a measure of the maximum ability of your body to consume oxygen at a ratio to your body weight.  The higher it is, theoretically the better your running performance should be.

However, what researchers now clearly understand is that V02max, while can be used a general guideline to predict running performance, it is not a great predictor of who will be the best runner.  This value CAN tell you who will likely win a cross-country skiing race for instance, but not running.  There is another confounding variable that makes oxygen intake not as important in our sport.  This factor is known as running economy.

Running economy is a measure of how efficiently the oxygen you take in is translated into forward running speed.  Running economy has such a significant impact on performance that it allows runners to beat competitors that are significantly more fit than them simply because they make better use of their oxygen intake.

So with our training, yes we want to get more fit, as do all endurance athletes.  As runners there is a second and equally important variable we need to focus on: improving our running economy. 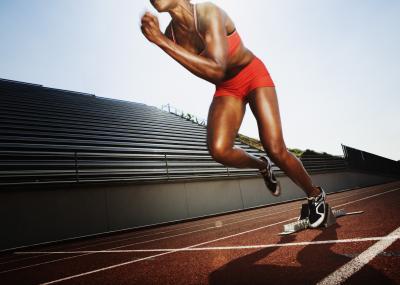 How to boost your running economy

There are a number of factor that contribute to running economy.  There are some factors that we cannot modify.  For instance, researchers have shown that runners with light ankles will run more economically than runners with heavy ankles.

There are also factors that we can modify with training over long periods of time.  For instance, running hard up hills in training will improve a muscle’s ability to launch us forward during a race.

Finally, there are things we can do that will acutely have an impact on running economy.  We now know that the more functionally “stiff” a runner’s leg is, the more economical their stride will be.  This stiffness allows for a load and recoil action that launches us forward.  With the weighted vest used during a warm up, this stiffness is thought to be enhanced.  Static stretching on the other hand, as I have written about before, is known take away from this beneficial stiffness.

In a weighted study published in an excellent PhD thesis, 11 trained runners were put through the following regime:

4) Then a number of tests were conducted looking at leg stiffness, running economy and running speed.

They found that the weighted vest trials showed:

Wow.  Simply by doing strides with a weighted vest rather than strides without one, the athletes saw a 6% improvement in their running economy.  This almost seems like cheating.  This improvement is seen because of an enhanced neuromuscular facilitation.  These athletes did not all of a sudden become more fit, but their legs became primed to act as better springs to launch them forward.

Now, keep in mind this study only looked at the very short term impact of this type of warm up.  For instance, the running economy test only lasted 5 minutes.  I wonder if the same improvement would be seen throughout a 10K?  More research is needed.

Should you actually warm up with a weighted vest?

It’s worth a try, but I am not going to.  All of the races I participate in last over 5 minutes.  It’s too soon to tell if the impact of the weighted vest will persist in a longer race.  I also have to wonder if there is a trade off with neuromuscular fatigue later on in a race.

However, what this research does remind us of is the importance of striving to enhance your running economy.  There’s more to running than fitness!  Stop stretching, sprint up hills, do speed work, lift weights and you will run faster without actually having to be more fit!