Strength training or plyometrics to improve your running economy?

I am not going to waste your time preaching about how strength work is better than no strength work.  It think all runners know that whether you are doing high rep low weight, low rep high weight, or explosive/plyometric/jump training, adding some sort of strength training will make you run faster.

How does it work?  Strength training does not really improve our cardiovascular fitness, but it has a profound impact on our running economy.  While it may not help us to consume more oxygen (that’s what running does), strength training helps us to utilize the oxygen we take in more efficiently and transfer it better into forward running momentum.  There are a few different mechanisms by which this is suspected to work, which I will discuss in a future article.

So, my interest is not to convince you to do strength work- I am assuming that everybody knows this!  My interest is in directing you to the BEST type of strength work.  What will give you the most bang for your buck?  That’s what I am going to look at with this article. 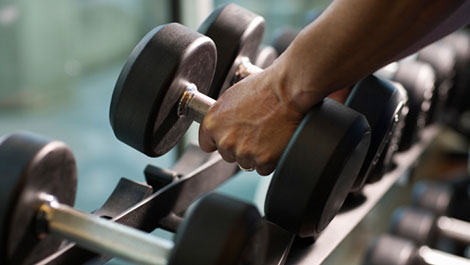 First of all, we are going to cut out the high rep, low weight exercises.  They are great for developing muscular endurance- but so is running.  The goal with weight training is to provide a stimulus that you aren’t getting from your running on its own.  That being said, if your choice is high rep low weight or NOTHING, stick to your routine.  Just know that you would give a significant boost to your performance if you chose plyometrics (such as jump squats) or slugging heavy weights (squats with lots of weight on your shoulders allowing for a 6-8 rep max).

When it comes to plyometrics vs. lifting heavy weights, the activity and subsequent mechanism of action is different.  Plyometrics involve less total force going through the legs, but a much faster and more explosive muscle contraction.  Heavy weight lifting is a much slower activity, but this slower motion allows us to put more total force through the muscle.  In next month’s article, I will discuss more.  Today, my only interest is functional: what works better.

Here is your answer (which may be a surprise to you): heavy weight training trumps all.

In this 2009 study, 16 well-trained athletes were put through a 4-week protocol.  Some did explosive training and some did heavy weight training.  What they saw, to no surprise, was that both groups saw an increase in running economy.  However, it was also clear that the heavy weight group showed more improvement (6.7%) than the plyo group (1.9%).

Now, this study wasn’t perfect.  My major concern was that there was no crossover, and the heavy weight training group has a lower starting point (randomly) in terms of running economy.  As a result, they may have simply had more room for improvement.  A crossover study where they switched training protocols would have been a good way to eliminate this possible bias.  That being said, 6.7% vs. 1.9% is enough to make me lean toward heavy training despite the flaws.  Onward to the next study..

The nice part of this research is that it can be directly applied to your training NOW, and results can be seen within 4 weeks.  Based on the best evidence out there, runners should (a) do heavy weight training as a first priority (6-8 rep max) and (b) do explosive type training when that is not an option.  After all, we don’t all have a squat rack and a spotter to help us squat 300lbs.  For this reason, I often ask my runners to do plyometric training instead just out of convenience.

It is also important to keep in mind that there are those who will respond, and those who are less likely to benefit from this type of training.  The idea behind weight training is that we want to (a) maintain/gain lean muscle mass and power to weight ratio and (b) improve the elastic and contractile elements of your running muscles.  We don’t want to turn you into a body builder.  For that reason, women of any age and masters male athletes tend to respond better (because they have a tougher time maintaining their musculature).  Men in their 20’s and 30’s still show improvements in running economy with strength training, but the change is not as significant when compared to other demographic groups because their physiology allows for more muscle with less effort.  Hitting the squat rack is not as high of a priority for men in this age range.

It is also important to keep in mind that heavy weight training sessions are difficult to recover from.  Make sure you have enough time in your week to fit them in while maintaining your running.  Based on the first study, adding weight training might give you a boost of 2-7% in running economy.  That’s great, but if you don’t have the baseline aerobic  fitness (VO2max), then 2-7% will mean nothing!  Some studies show that you can, depending on your ability to respond, manipulate your aerobic fitness (V02max) by ~30%!  So if you’re stuck for training time, your efforts are still much better spent chasing that 30% aerobic fitness (i.e. hitting enough mileage and getting enough quality/intensity runs in).

If you want to implement strength training into your off-season, I would recommend: