Santa comes to town at the 7th Santa Pur-suit

What a treat for the 7th annual Santa Pur-suit!

As thousands of spectators set up their camps for a fun morning of Santa Claus parade watching, many were caught by surprise when our runners and walkers took to Weber Street about half an hour before the parade started!

Look who do the Santa PurSuit this morning #runwaterloo #santapursuit

To the fundraisers and donors: thank you for raising $3,500 for local YMCA programming. This was our first Santa Pur-suit that wasn’t hosted at Stork Family YMCA, but it was certainly fun!

And they’re off! Annual Santa Pursuit in support of @YMCAsofCandKW leading off the KW Santa Claus parade. pic.twitter.com/hwLRLJ059e

Huge thanks to the Lion’s Club of Kitchener for including us in this great day.

We have posted a small “sneak peek” album, but check back later this week for hundreds more free photos. 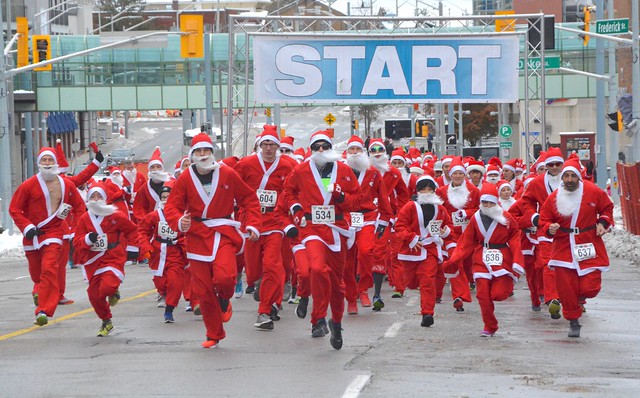 This was our first time doing exclusively a 3k (no 5k), so it’s no surprise that there was a clean sweep of records at this race. Congratulations to all participants. Winners were: