How nuclear bombs tell us to take time off

The off-season is officially upon us! YA. Time to dial back the volume and intensity, take care of low-grade injuries, get back to other aspects of training you’ve missed, and just generally take it easy and dream up performances to come in 2016.

At our club, Health and Performance, I have seen a number of different approaches to the off-season from our athletes. Some are still hammering, some are decreasing volume and intensity to varying degrees, and others are 100% taking time away from running. Deciding how to manage your off-season is a complicated decision based on a number of factors (injuries, 2016 goals, mental fatigue, level of performance/training in 2015, complicating non-running things) that probably only YOU know all the details of.

However, no matter who you are, I still strongly suggest that some time away from running entirely (1-3 weeks) is a good idea. There are a number of reasons why I say this, but I was once again reminded of the importance of time off when a colleague sent me this study looking at the rate of cellular turnover in different cells in our body.

Most runners will experience chaffing (skin injury), muscle strains, and some sort of tendinitis/osis at some point. What heals the slowest out of these three tissue types? Tendons!

These researchers of this study had a very interesting way of looking at our tendons, and why they are such slow healing structures. They explain that 14C* (a certain carbon isotope that is produced during nuclear bomb testing) in our atmosphere rose significantly from 1955- 1963 during the bomb testing era. Carbon is an element that is found in every tissue in our body. If its concentration is high in the atmosphere, eventually the concentration of the isotope will go up in plants (remember, photosynthesis takes atmospheric C02 and water and makes the stuff we eat), and animal meat (after they eat the plants). Therefore, after we eat animals, plants, or both, the 14C concentration will go up in all tissues in our body.

Then, after the bombs stopped in 1963, the 14C concentration went down in our atmosphere, and eventually it filtered down to a decreased 14C concentration in the tissues of those from the era.   However, because each of our tissues turnover at a different rate, the time it takes for 14C to disappear differs depending on what tissue you look at. When comparing muscle and tendon, this is what they found: 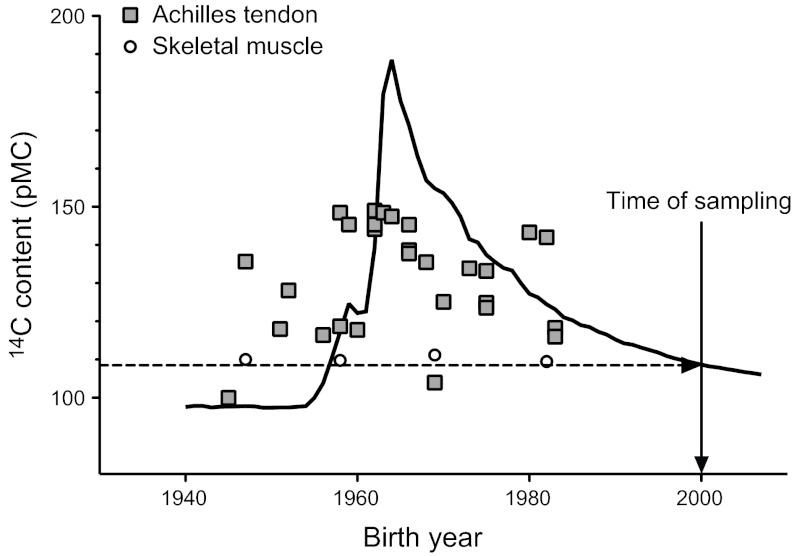 -The 14C concentration in muscles (circles) was low regardless of year of birth. The muscle cells turned over, and are now full of carbon not found in their bodies at the time of the bomb testing.

-The 14C concentration in the tendons (squares) stayed high, corresponding with when the levels of 14C were high in the atmosphere. In other words, despite many years going by, carbon found in the air at the time of birth was STILL found in these tendons!

The authors note, “it is evident that the Achilles tendon tissue samples had retained levels of 14C corresponding to the atmospheric levels several decades before sampling. Based on this observation, it can be concluded that renewal of adult core tendon tissue is extremely limited.”

Yeah, our tendons just don’t turn over that much, if at all! So if you’re having a hard time getting over a chronic case of Achilles tendon problems, this low turnover has a lot to do it.

How does this relate to your off-season? I think it provides reason to take some time (1-3 weeks) completely off, but at the same time not TOO much time off.

Obviously it would be nice to have a clean, randomized controlled trial that prospectively follows runners with various off-season protocols, and shows which one is best. This would be great, but also almost impossible to regulate. Therefore, we need to take strategic guesses at what will work based on the evidence we have, and histological evidence is an outstanding piece to the puzzle.

Having some time completely away from running will hopefully allow for asymptomatic micro-tears in our tendons to have a chance to get caught up with the repetitive strain running puts into them. However, as I have written about in the past, loading the tissues ENOUGH is the key to getting over chronic injuries. So taking 3 months off, for instance, is likely going to weaken the tendon and decrease its ability to recover.

Even the authors note that they saw significant variability in the 14C content among subjects of the same birth year. They explain that this is partially because, “tendons are likely to have different loading histories during early years, as opposed to more protected tissues, such as the eye lens, that showed a very close association between birth year and 14C content.”

They are saying, in short, that variability in loading history will increase or decrease 14C turnover, unlike our eyes, which show less 14C variability due to more consistent loading. This is yet another small reason to add to the pile of evidence showing that it is important to find the proper balance of loading and recovery to maintain healthy tendons.

So enjoy your off-season, take into account all the factors unique to you, keep tissue turnover (or lack thereof) in the back of your mind, and decide how much time you should take away from running this off-season.