March Running News covers world and college championship events and other top results from the past five weeks.

A lot has happened in the last month in the world of athletics. The following summary is loosely in a reverse-chronological order:

2016 was the first year Canada sent a team to this championship event, which took place in Wales this past weekend. An impressive 11 men and 10 women met the qualifying standards, yet only 3 could represent Canada in each race. Reid Coolsaet, Rob Watson and Brandon Lord raced for the men, while Lanni Marchant, Laura Batterink and Waterloo Region’s very own Tarah Korir were selected for the women’s team.

The men had a much more difficult experience, in part due to worsening weather conditions throughout the day. Coolsaet was the first Canadian to cross the line in a time of 1:04:56, just inside of the qualifying standard but much slower than his qualifying time of 1:03:37. Watson finished a few places behind him in a time of 1:06:15, followed by Lord in 1:11:00. As a team, they were 12th.

The World Indoor Championships was the last major track and field competition before the Olympics this summer. Canada was represented by 14 athletes in 10 different events. The biggest story was multi-event athlete Brianne Thiesen-Eaton, who won her first world title in the pentathlon. Thiesen-Eaton finished with the silver medal in 2014, and also in the heptathlon this past summer at the outdoor championships. Her performance set a new Canadian record. Other top performances included:

*9th place in men’s and women’s 3000m – Mo Ahmed and Jessica O’Connell. The 3000m events were prime examples of championship races: winning times were significantly slower than the athletes’ capabilities, starting very slow but finishing very, very fast. The first kilometre of the women’s race was run in 3:15, but the second and third kilometres were each 30 seconds faster!

*In her first senior world championship appearance, CIS athlete Gabriela Stafford finished 5th in her heat of the women’s 1500m, just missing qualifying for the finals (more on her below).

The most unexpected performance of the meet came from an American named Boris Berian, who is 23, unsponsored, and was more or less unknown until he won the 800m race at USA indoor national championships earlier in March. He ran away from the entire field, leading from the gun and finished with the gold, surprising almost everyone.

Competitor.com has an interesting article on the future of track and field from a media perspective.

The third opportunity to represent Canada was at a 10K road race in Puerto Rico which pitted the countries of North America, Central America and the Caribbean against each other. Marchant and Trevor Hofbauer represented the True North, and came away with the win. 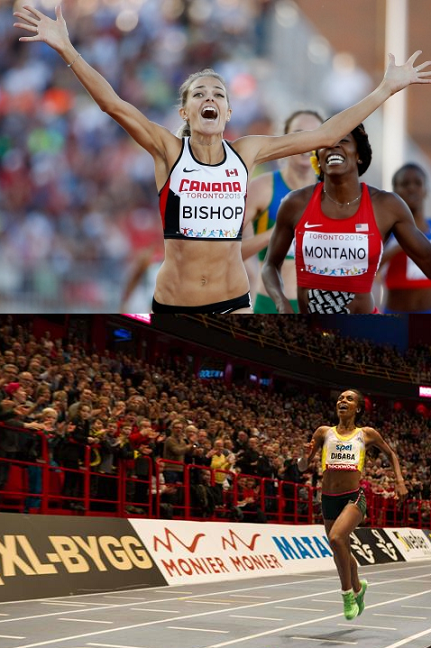 The end of February featured strong performances and new records all over the world:

*800m star Melissa Bishop broke the Canadian indoor records TWICE within three days in Dublin and Glasgow, to finish her indoor season on a very high note. Bishop made world headlines last summer when she won silver at the world championships in Beijing.

*Ahmed set a new Canadian indoor record in the 3000m at the Millrose Games in New York.

*Genzebe Dibaba continued her world record-setting streak by going after the indoor mile record in Sweden. The Ethiopian took almost four seconds off the previous record, running a time that is not far off of the outdoor record. That makes 5 world records for Dibaba since February 2014, and she doesn’t look to be slowing down anytime soon.

Since the last column, the university indoor track seasons have come to a close. Local athletes continued to impress: Naomi Lance (300m) and Joerg Ahne (long jump) of UW both won silver medals in their respective events at the CIS (national) Championships. Laurier was represented at CIS for the first time ever by Adam Cornwall, who ran yet another strong race to finish sixth against a very competitive field.

The performance of the meet goes to Stafford, who recorded double victories in the 1000m and 1500m, setting a new CIS record in the 1000m. Stafford was awarded Outstanding Athlete of the Meet for women, while the men’s equivalent was Corey Bellemore of Windsor. Bellemore won the 600m event and finished second in the 1000m race. He was also a member of the gold medal 4x800m relay team.

South of the border, Justyn Knight of Vaughn, who runs for Syracuse, had a terrific season as well, finishing with a bronze medal at the NCAA Division 1 Championships in the men’s 3000m race. Knight is another of Canada’s strong young athletes who is targeting an Olympic appearance this summer.

Next month, this column will look at Canadian Olympic hopefuls in the marathon and other distance events, as well as the ongoing doping scandals that are plaguing the sport.