Well my running friends, the fall racing season has come and gone. Congratulations on your season of hard work and dedication! Now it is time to recover, start planning the 2014 schedule, and initiate some good-old base training.

If you did not reach your target time in 2013, one of the reasons may have been related to a strong muscle spasm that just would not let up; something we like to call ‘exercise associated muscle cramping’ (EAMC). EAMC is a frustrating and ridiculously painful experience. They are frustrating because often athletes feel as though they got cheated out of a good result. These spasms can happen without being at the limit of your cardiovascular fitness- the energy and desire to compete can be there but the legs just won’t respond. Why does this happen?

So what causes these spasms, and how do we get rid of them? Often it is assumed that it is a result of an electrolyte/hydration issue. Is this true? 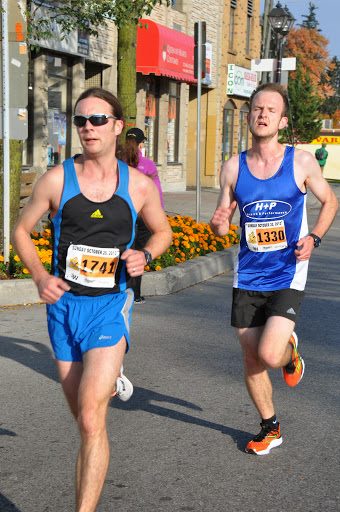 While it was once thought that over heating and electrolyte imbalances were the cause of isolated muscle spams, we now understand that this is not the case. For instance, this study from 2003 looked at 72 runners participating in an ultra-running event. Afterwards, they were separated into groups of those who did suffer EAMC, and those who did not. In the end, what they found was that there was no correlation between those who suffered cramps, and those who experienced an electrolyte imbalance. They also found that there was no correlation between fluid loss and the frequency of EAMC.

This review from 2008 published in BMJ offers a good summary, along with an explanation of what does cause EAMC. In summary, they show how most studies confirm that electrolyte imbalances and dehydration do not lead to instances of isolated muscle cramping. Obviously, this is not a reason to ignore the value of proper hydration and electrolyte maintenance. However, what it does show is that if you have a tendency to have, for example, cramping in your hamstrings at the end of a hard marathon, adding more fluid and electrolytes likely is not the answer.

So if it’s not hydration or electrolytes, then what is it? The authors of the above review say the best evidence points toward it being a case of neuromuscular fatigue. In other words, the ability of the nervous system and muscle to work synergistically during the race fatigues. More specifically, the capability of each small nerve to stimulate each muscle cell at the nerve-muscle connection (motor unit) breaks down and some start to shut off. As a result: cramping.

This 2010 study supports the neuromuscular mechanism as the cause for the EAMC. The study looked at over 200 athletes competing in an Ironman triathlon. Body weight and serum concentrations of electrolytes were measured before and after the race. Once again, it was found that hydration and electrolytes had no impact on the incidence of EAMC. Instead, it was found that the speed of the athletes was independently associated with developing cramping (along with a history of cramping).

Simply put, if you work out at a higher intensity, you can start to develop neuromuscular fatigue, and your muscles will cramp. This not a nutrition problem, not a cardiovascular problem, but an intrinsic muscle problem.

How do we fix it?

Again, this research is not a reason to ignore hydration and electrolyte maintenance while competing. However, what it does tell us is that fixing isolated cramps by dumping in more water and salt pills is just plain silly (and could potentially cause a whole host of other issues- but that’s for another day).

If it is true neuromuscular fatigue that you are experiencing, the solution is simple: strengthen the muscle that is letting you down. Take for instance this case report from 2010. The athlete in the study experienced frequent cramping in his right hamstring. When examining the athlete, the researchers discovered weakness in the glut muscle. They also found that the hamstrings were activated more than expected during two parts of the athlete’s stride. They hypothesized that this over-activation of the hamstring was a result of weakness in the gluts.

So, the individual was put through a glut strengthening protocol. He was able to increase his hip extension strength from being able to lift 35.6 kg all the way to 54.7kg. Then, in his 3 subsequent triathlons: no muscle cramping.

Obviously, the sample size of this study is small (1 participant, only 3 races post-rehab). That being said, it follows the same decision making you should be making to try to fix yourself, avoid your cramping, and run stronger in 2014.

To fix your EAMC, ask yourself:

1) Where does your muscle cramping occur?
2) Is that muscle weak?
3) Is another associated muscle contributing to the problem?

Once the deficiency is identified, now it’s time to correct it with strength work!

And for the Health and Performance athletes reading this: yes, there is a reason for all of those walking lunges after all!